Tom Flynn, the Executive Director of the Council for Secular Humanism, provided the educational presentation at our November 21st public meeting at the Ridgedale Library. He spoke on the problems that the Christmas celebration presents to atheists, a topic with which he has been identified since the 1993 publication of his book The Trouble with Christmas.

Flynn showed that our Christmas rituals, contrary to the modern myth, are not a tradition extending back into antiquity. Rather, Christmas was seldom observed in England and America until well into the 19th Century. It was not mentioned in the London Times until 1820. The rituals of our Christmas are largely the invention of two fiction writers. Washington Irving, who in his 1812 History of New York introduced a flying St. Nicholas, wrote Christmas stories recalling with nostalgia English family celebrations that he never experienced. Charles Dickens detailed a family Christmas as if it were traditional in 1836 in his Pickwick Papers. The other “inventors” of the Anglo-American Christmas credited by Flynn were Queen Victoria, whose husband, Prince Albert, introduced the German Christmas tree to England; Clement C. Moore, who wrote The Night Before Christmas in 1823; iconic political cartoonist Thomas Nast, who produced the modern image of Santa Claus; and Francis Church, who, in 1897 published in the New York Sun the famous reply to a young girl, “Yes, Virginia, there is a Santa Claus.”

Tom Flynn sent the following letter of thanks to Minnesota Atheists:

Now that my madcap “helladay” season road trip is winding down, I have an opportunity to catch up on thanking everyone who helped make my year-end speaking tours possible.

I’d like to extend my thanks to you and everyone from Minnesota Atheists for your exceptional hospitality during my visit to the Twin Cities, and to all the group members who turned out for my talks. Thanks also for the most pleasant trip to Q. Cumber’s, my very first experience in patronizing a commercial sponsor of a major atheist radio program!

Thank you also for all of your help with logistical details during the planning of the event.

Best wishes for the new year. Under the circumstances I doubt you’ll be miffed if I fail to pass on Xmas greetings! 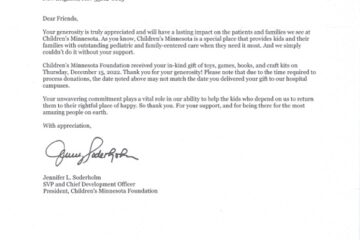 Thank You from Children’s Hospital

Minnesota Atheists recently received the following letter from Children’s Minnesota. This is a response to our “War on Christmas” gift drive and wrapping event. The board also adds our thanks to Caroline for coordinating this Read more…

By George Francis Kane On December 13, President Biden signed into law the Respect for Marriage Act, which requires states to recognize same-sex and interracial marriages performed in other states. Those marriages were already protected Read more…

By George Francis Kane Donald Trump knew that conservative Christians were his core constituency, and so was always eager to promote their political power. In particular, he declared his determination to end the so-called Johnson Read more…