Atheist Advertising Amplifies – Is it our turn?

The British Humanist Association led the way in promoting a humanist/atheist advertising campaign.  Since then, COCORE and the American Humanist Association have released their own campaigns in the air on billboards and on buses in Washington D.C.  The Freedom From Religion Foundation has a long history of ads, including a few which have been taken down.

Now, Minnesota Atheists could do the same thing.  As a non profit, we can get a good deal on advertising on billboards.  The billboards are usually half the size of a full billboard, 22′ by 10′. To get the non profit rate on advertising, which is less than $500 an ad for 4 weeks, we need to follow some rules.  Our message can’t be controversal, specifically with regards to religion. With that restriction in place, what are your ideas for a friendly atheist ad?  Do you think we should bother?  Let us know in the comments. 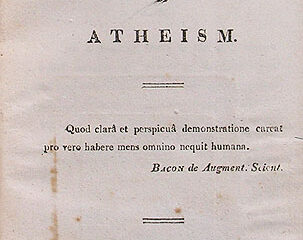 On Sunday, January 23, 2022, join Minnesota Atheists online for a business meeting including board nominations and a featured presentation by past president of Minnesota Atheists, and an active member of the atheist movement since Read more…

Jim Barri and Laurie Weiss Johnson at the June Picnic